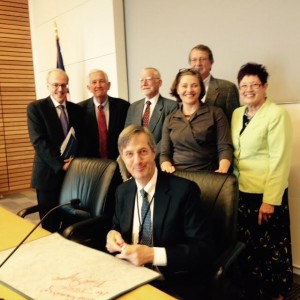 At the June 10, 2015 Port of Portland Budget Hearing, the Port presented the Commission with a section of the retired airport carpet. In this photo, Port Executive Director Bill Wyatt is signing the section at the request of the Commission. In the background are the TSCC Commissioners at that time: David Barringer, Terry McCall, Steven Nance, and Gulgun Mersereau, along with now-retired executive director Craig Gibons and TSCC’s budget analyst, Tunie Betschart.

The Tax Supervising and Conservation Commission protects and represents the public interest, ensures Multnomah County governments’ compliance with Local Budget Law, promotes economy and efficiency within those local governments, and provides advice and assistance to them.

The Commission has jurisdiction over all local governments in the county that are required to follow local budget law and which have more real market value within Multnomah County than in any other county. Those with a population under 200,000 may opt out from the Commission’s jurisdiction. Thirty-three of the 43 taxing districts in Multnomah County are TSCC members. They include Oregon’s largest county, city, school district, community college, education service district, port, mass transit district, regional government, and urban renewal agency.

Five commissioners, appointed by the Governor to four-year terms, direct the commission’s affairs and serve without compensation. TSCC administrative employees are appointed by the commission. The Attorney General serves as legal counsel. Operating expenses are limited by statute and the total amount is indexed 4% per year. Oregon law requires Multnomah County to pay the operating costs of the commission and to provide it with office space. The county covers these costs out of its General Fund and is reimbursed for one-half of the net operating expenses by the municipal corporations under the commission’s jurisdiction.

The Commission annually serves the taxpayers by providing an extensive review of the budgets of the local governments within its jurisdiction. The reviews are both procedural and substantive in nature. Procedural checks establish compliance with the various laws governing local finance, particularly local budget law. They include such steps as verifying that the approved tax levies are within the constitutional limits and substantiated by budgets, ensuring that public notice requirements have been met, and validating that financial information is included in adequate detail. A substantive review of program content, the reasonableness of estimates and coordination of financial planning among various units is also performed. All budgets must be reviewed by the commission prior to adoption by the governing body. The Commission certifies whether it has any objections or recommendations to make with respect to the budget and requires a response by the governing body. These types of review and the certification process distinguish TSCC from other regulatory bodies, such as the Oregon Department of Revenue or the county assessor, which do not receive copies of the budget documents.

The Commission provides an independent and objective forum, by way of public hearings, at which citizens may obtain information and express their views regarding the budgets. Commission members represent the public at these hearings by asking questions indicative of the community at large. These annual public hearings are mandatory for entities with populations in excess of 200,000 and may be requested by the other taxing districts in lieu of the governing body conducting its own public hearing. The Commission holds additional public hearings throughout the year on property tax measures placed before the voters. The Commission may also call joint meetings of the levying bodies to discuss tax coordination or any other area of common interest.

The Commission is required by law to publish a comprehensive Annual Report of all Multnomah County local government budgets, indebtedness, property taxes and other financial information. This report has been published faithfully every year since 1922. Copies of these publications, local government budgets, and independent audits are available for review by the public at the Commission’s office. Recent copies of the Annual Report are available on the Commission’s website at www.tsccmultco.com.